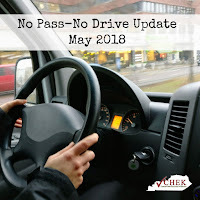 On Monday, May 14, 2018, a mother took her homeschool student to take her permit test. Unfortunately, the Pike County Circuit Clerk office stated that in order to allow the student to take the permit test, the Clerk’s office would need a letter from “the homeschool program” the student is enrolled in as proof she is homeschooled. Knowing this is not the procedure outlined by the Kentucky Department of Transportation, the family left. They communicated with CHEK on Tuesday evening about the incident.

CHEK Board member Devonne Bolin called the Pike County Clerk’s office on Wednesday, May 16. After speaking with the clerk, who did reiterate that the homeschool family needed to bring a letter of proof before the student could take the test, Devonne explained the actual steps outlined by the KDT. Devonne also explained that independent home educators do not use a specific program from which they would be able to obtain a letter. The only letter homeschoolers submit is to the local district notifying them of their private school. The clerk transferred Devonne to the Head Circuit Clerk, Mrs. Spears. Mrs. Spears apologized for the misunderstanding and stated the lady at the window had not worked in that position for a little while. She asked us to communicate to the family to come back in on Friday and there would be no issue.

However, less than two hours later, Mrs. Spears called CHEK back and asked if the form had been signed or sealed by the school. Devonne again explained this is not the procedure outlined by the KDT and the form states on the bottom that a seal is not required for homeschool students. Mrs. Spears relayed she had received an email from the Director of the KDT stating that indeed the form did need a seal. Mrs. Spears was polite and eager to work with us. She said if we could confirm the policy with the KDT, she was willing to work with the family. CHEK began an intense effort to confirm the procedures with the KDT in case there had been a policy change.

CHEK Board Members left messages over three different business days for the Director of the Kentucky Department of Transportation. CHEK did not receive a phone call back. On Thursday, May 24, Devonne Bolin called the KDT asking to speak with a person that could help clarify the policy on No Pass No Drive for homeschool students. Mr. Mitchell from the Graduated License Department was most helpful in communicating with us the following:

Mr. Mitchell apologized that this student had been waiting so long to receive their permit and said he would call the Pike County Clerk’s office. Devonne called and spoke to Mr. Mitchell on Friday, May 25, confirming that Mrs. Spears had been spoken to Mrs. Spears and the homeschool student could again try to test for their permit within policy requirements.

Mr. Mitchell was concerned that this has been an issue and was preparing the information presented by CHEK to conference with his supervisor, Head of the Graduated License Department, Mr. David Atha, about a way they could solve this continual problem and communicate with the clerks. There seems to have been some confusion between independent homeschool students and public school students using online option. Mr. Mitchell asked about other counties that may have been requesting a wrong procedure and we were able to relay that Hardin, Warren, and Boone County Clerks’ offices have consistently asked for a signature or a seal from the local school district. We are expecting to speak with Mr.Atha in the next week.

If you have a child planning to take their permit test, please follow the steps outlined on the Laws and Forms page of our site. If you are asked to get a signature or seal on the School Compliance Form, ask the clerk to call the Graduated License Department of the Kentucky Department of Transportation for clarification. If they are unwilling to cooperate with you, please fb message or email CHEK: info@chek.org or call HSLDA.

Popular posts from this blog

So you’ve decided to homeschool! Now what?

By Gina Glenn 10:09 PM
So You’ve Decided to Homeschool! Now what? D.Bradley Here is some direction for those of you who have decided to home educate, but you don’t know where to start. 1. Start with your kids This is going to be a boring and fruitless endeavor if you don’t have any kids to educate. If you do, take a look at them.   Not one of those motherly bruise-inventories or an investigation into what they’ve been eating by inspecting the corners of their mouths, but a good, quiet observation of them.   Think about what they’re like, what their gifts and talents are, what they enjoy, what they don’t.   Who are they?   (We know you’ve asked this question of yourself before, like after the deafening crash at the supermarket or after you found the harmonica-shaped hole in the living room wall, but we don’t mean it that way now.)   Who is this little person? Fact: every child is different, and no single approach is best for all kids. But that’s what’s great about homeschooling.   I
Post a Comment
Read more

Letter of Notification of Your Private Homeschool

By DBolin 7:28 PM
The time of year will be quickly approaching to notify your school district of your private school!  This is the first step in creating an official private school in your home.  We receive many questions about this step, and encourage you to read the following information, including eight of the most common questions with answers. Here is a sample copy of the  Letter of Notification .  You can see that  KRS 159.160  states, “The reports shall be made within the two weeks of the beginning of each school year.”  So, if your school begins on Monday, August 3, your letter needs to arrive at the office of the Superintendent by Friday, August 14, the end of the second school week.  You can find the address and name of the Superintendent in this  Kentucky School Directory .  This is a 2021 directory.   You can also look at your district's website. .   As in the past, CHEK recommends that you send your letter certified mail with a return receipt.  When your
Post a Comment
Read more

Declaration of Participation Forms for Title II, III, and IDEA-B

By DBolin 6:44 PM
Kentucky is a private school state, meaning there are no "homeschool" laws on the books! Yes, you read that right! Pioneer homeschool leaders were wise to think ahead 25 years ago when the case of private church schools and homeschooling arose. Hang in here with me for just a minute and you will understand the connection between this statement and the forms. Your homeschool is a private school that operates in your home, the exact same as the local parochial or private church schools. Have you heard the phrase, "There is strength in numbers", or "A three cord strand cannot be broken"? We fall under private school laws. Of course, the 4th amendment gives us right to privacy in our home (yea!). Many people do not understand this about our Kentucky laws, and this was the perfect opportunity to interject. Now about the forms, federal law requires that the state send every (yep, you guessed it) private school these forms; if they do not get a response t
2 comments
Read more