Clearing It Up: Two Important Things to Understand about Home Schooling 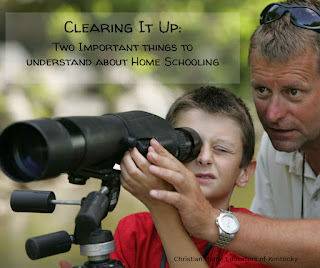 Arguments I most often hear or read from people in favor of more government oversight of home schoolers come from a misunderstanding of two things.  Let’s see if we can get those cleared up.

No, those are not home schoolers.  Those are truants.  There are already laws on the books in every state to fight truancy.  All the education personnel, law enforcement, and court designated workers have to do is use the truancy laws already in existence to prosecute those who are breaking compulsory education laws.

Ah, “Yes,” you say, “but how are they supposed to find them?  It would be much easier if there was some form of registration of home schoolers or if they have the authority to check up on all home schoolers so they can identify the truants.”  Indeed it would be easier, but to restrict the freedom of an entire group of law abiding people in order to make government workers’ jobs of finding law breakers easier isn’t really a good argument.

It was easier to put all Japanese Americans in internment camps during World War II in case some were loyal to Japan and wanted to undermine America’s war efforts.  It would be easier to create a Muslim registration in order to have a list to go from in identifying those who might be terrorists.
It would also be easier for police officers to find and arrest criminals if there was a law that required all citizens to check in with the local police department monthly and provide a listing of everything he/she had done with their time during the previous four weeks.  We all know that only law abiding citizens would do that because criminals are, well, criminals.  They don’t abide by laws.  That would make it very easy to identify law breakers.  Miss an appointment and they charge you.  Kind of like probation, except for everyone and for no justifiable reason.

There would be riots in the streets if something like that was even suggested, because it’s supposed to be innocent until proven guilty, not the other way around.  So, why do normal, law abiding people who would decry a law like that for themselves suggest that home schoolers should be willing to submit to one which requires them to turn in a log of their time to public school officials?  It’s unconstitutional to impose burdensome regulation on law abiders for the sole purpose of making it easier to identify law breakers.  Lest restrictive means.  Look it up.

Therefore, the premise of the argument is wrong.  No, those are not home schoolers.  They are truants.  It may be more difficult and take more time and effort for officials to find and prosecute them for breaking laws already on the books, but that’s their job.

Yes, law abiding home schoolers would very much mind any amount of extra oversight because some people in the general US population break a law.

The second argument is:

“It’s the school’s/board of education’s/government’s responsibility to see that kids are educated.  We have laws about that, after all.  So, it’s not unreasonable to require parents who take on that job themselves to show proof of doing it and doing it according to government standards.”

There are so many things wrong with that argument that I’m going to only list the first few before discussing one at length.

1. “We have laws about that”: Yes we do, but we shouldn’t.  The federal Department of Education is unconstitutional and should be abolished.

2. “according to government standards.”: Government education standards are so far below most home school parents’ standards it would be funny if it weren’t so sad.

Now, let’s unpack the pivotal statement that if everyone understood properly would eliminate most of the problems between parents and government entities regarding education.

“It’s the government’s responsibility to see that kids are educated.”

The government seems to be schizophrenic on this issue, however.  There are laws against abuse and neglect of children.  If a parent doesn’t feed, clothe, or provide shelter for their child, they will be charged with neglect and rightfully so.  If a divorced or single father doesn’t pay child support, he is breaking a law.  What do these types of laws tell us?  They say that the government recognizes that parents are responsible for taking care of their children and when they don’t, there will be legal consequences.

“Oh, but hold on just a minute there,” says Uncle Sam.  “Education of children is just too important to leave in the hands of parents, so that’s just not included on the list of things we allow parents to be responsible for.”

And there’s the problem.

"Parents having responsibility for the physical well being, health, and life of their children is one thing, but let's not get crazy and let them think they can actually teach kids stuff, too!"

When the government began writing laws about the standards parents should be held to as though they were handing out responsibilities like Mardi Gras beads, they fooled themselves and tricked everyone else into thinking that government is the source of parental rights. Enter the federal Department of Education. The government giveth, so the government haveth the authority to taketh away. And the worst part is that parents have been brainwashed into believing it.  (Please see historical debate over whether or not a Bill of Rights should have been included in the Constitution.)

Throughout history, parents and families educated their children.  Parents sometimes sent their children to schools or provided tutors, but it was the parent’s choice.  The parent delegated the day to day work of educating their child to another, however they retained the responsibility for the education of their child.  The parent instinctively knew this.  If they were dissatisfied with the delegate, they were within their rights as the parent and person ultimately responsible for the child’s welfare to make other arrangements.  The delegate was on trial and needed to prove themselves worthy, capable, and up to the parent’s standard.

Then, the first compulsory education law was enacted in the US in 1852.  Thus began the slow process of desensitizing parents to government interference.  As a result of the dumbing down of parental responsibility, there are unfortunately too many examples of irresponsible parents today.  But, hey, that was the point, right?  Tell parents they can't handle it, therefore through dependence on government they become incapable of handling it, so the government has to handle it.  And today, the Jedi mind trickery is complete; “These are not the children you are responsible for.”

For example, children that go to public schools today take home report cards every so often.  What is the underlying belief about the report card?  It is the school’s evaluation of the child’s performance to the parent.  Poor report?  Well, you parents better get it together and get that kid working harder so they will be able to perform up to our school standards.

School: Boss/Employer
Parent: Employee we can’t fire but sometimes wish we could
Student: Object being evaluated

If we hadn’t undergone the great brainwashing of the past 150 years, it would be different.  The report card would be looked at as an appraisal of the job the school is doing educating the child as the parent’s delegate.

Parent: Boss/Employer
Student: Valuable Asset in need of development
School: Employee hired to develop the potential of the valuable asset

It is a monumental difference in thinking that changes everything about the way you look at education.  As a parent, I am responsible for my children’s education.  I may keep the day to day job of doing that for myself or I may delegate that to another, but I am still responsible.  To complain and blame my delegate for doing a bad job and pretend that I’m not ultimately responsible for the outcome of just leaving my child in a bad situation does not relieve me of my responsibility.

Going back to the original argument:

“It’s the school’s/board of education’s/government’s responsibility to see that kids are educated.  We have laws about that, after all.  So, it’s not unreasonable to require parents who take on that job themselves to show proof of doing it and doing it according to government standards.”

Hopefully, now, that sounds like a gong in your ears.  Arrogant, completely backward, and out of step with truth and reality.  That’s certainly how it sounds to me.

Popular posts from this blog

So you’ve decided to homeschool! Now what?

By Gina Glenn 10:09 PM
So You’ve Decided to Homeschool! Now what? D.Bradley Here is some direction for those of you who have decided to home educate, but you don’t know where to start. 1. Start with your kids This is going to be a boring and fruitless endeavor if you don’t have any kids to educate. If you do, take a look at them.   Not one of those motherly bruise-inventories or an investigation into what they’ve been eating by inspecting the corners of their mouths, but a good, quiet observation of them.   Think about what they’re like, what their gifts and talents are, what they enjoy, what they don’t.   Who are they?   (We know you’ve asked this question of yourself before, like after the deafening crash at the supermarket or after you found the harmonica-shaped hole in the living room wall, but we don’t mean it that way now.)   Who is this little person? Fact: every child is different, and no single approach is best for all kids. But that’s what’s great about homeschooling.   I
Post a Comment
Read more

Letter of Notification of Your Private Homeschool

By DBolin 7:28 PM
The time of year will be quickly approaching to notify your school district of your private school!  This is the first step in creating an official private school in your home.  We receive many questions about this step, and encourage you to read the following information, including eight of the most common questions with answers. Here is a sample copy of the  Letter of Notification .  You can see that  KRS 159.160  states, “The reports shall be made within the two weeks of the beginning of each school year.”  So, if your school begins on Monday, August 3, your letter needs to arrive at the office of the Superintendent by Friday, August 14, the end of the second school week.  You can find the address and name of the Superintendent in this  Kentucky School Directory .  This is a 2021 directory.   You can also look at your district's website. .   As in the past, CHEK recommends that you send your letter certified mail with a return receipt.  When your
Post a Comment
Read more

Declaration of Participation Forms for Title II, III, and IDEA-B

By DBolin 6:44 PM
Kentucky is a private school state, meaning there are no "homeschool" laws on the books! Yes, you read that right! Pioneer homeschool leaders were wise to think ahead 25 years ago when the case of private church schools and homeschooling arose. Hang in here with me for just a minute and you will understand the connection between this statement and the forms. Your homeschool is a private school that operates in your home, the exact same as the local parochial or private church schools. Have you heard the phrase, "There is strength in numbers", or "A three cord strand cannot be broken"? We fall under private school laws. Of course, the 4th amendment gives us right to privacy in our home (yea!). Many people do not understand this about our Kentucky laws, and this was the perfect opportunity to interject. Now about the forms, federal law requires that the state send every (yep, you guessed it) private school these forms; if they do not get a response t
2 comments
Read more